Hikaru Hanada
Akihiko Usami (宇佐見 秋彦, Usami Akihiko), nicknamed Usagi, is a main character in the Junjou Romantica series. His lover is Misaki Takahashi and their relationship title is Junjou Romantica, which bears the same title as the series.

Akihiko is a rather perverted individual, as well as reckless. He is a professional writer, yet pays really no heed to deadlines as he should, and is very childish. While he does give off this mature and dignified air about him, deep down he is nothing but a child.

Akihiko writes Boys' Love (BL) novels as well as other books. His BL novels, written under Yayoi Aikawa (相川 弥生 Aikawa Yayoi), used to be based off of Takahiro Takahashi, now they are based off of Misaki Takahashi.

He is also possessive, such at times when he doesn't want Misaki to talk to his senpai or to mess with his editor.

In the very first episode of the anime, Misaki finds out that Takahiro is getting married, but Akihiko shows no remorse. Due to this, Misaki takes Akihiko outside to speak with him. As soon as Misaki cries for feeling Akihiko's pain of getting his heart broken, Akihiko then realizes that he is the one for him and kisses him. Sometime after, Takahiro and his wife move leaving Misaki left with Akihiko. As he began "molesting" Misaki, the two soon develop feelings for one another. He, on a regular basis, teases Misaki, also contributing to the whole "perverted old man" mindset Misaki adapted for him.

However, Misaki's view of him is constantly changing between two perspectives; there is the kind side of Akihiko, who Misaki adores very much, and the usual side of him which is not only overbearing and overprotective, but arrogant and controlling.

Akihiko's father, had stated that he was a fragile child growing up, who would much rather distance himself from others. Likely due to the fact that he absorbs people's words and actions towards him more than he should. It can still be said of him up until he had met with Misaki.

Usami also told his father about his books' writing style- that it used to be sad and sort of depressing, but being with Misaki, it changed his writing style making it "softer." His stories became more enjoyable. Thus telling him how much Misaki means in his life.

He feels very anxious every time Misaki does something he does not expect him to do and hopes to protect him himself. When Misaki confesses what he thinks and might plan to do to get people who know about their relationship to accept Misaki, Usagi asks him not to do anything because his anxious and troubled.

In the later part of the Manga, when Manami sort of suspects Misaki relationship with him, Usagi finds him acting strange and managed to pry is out of him although Misaki ended up with a meltdown. Usagi shows his mature side, calms him down and takes him out to the balcony. They then both pour their thoughts out. Usagi tells Misaki that no matter what, he will never let him go and asks for the same from Misaki.

Akihiko Usami birthday is on March 3rd, making him a Pisces. He likes to write about Takahiro and later Misaki in his BL novels. (It was also revealed later- that his editor, Aikawa was the one who likes to suggest him on different scenarios he would put in his BL) He has rooms full of toys, stuffed bears and things/pets he find interesting. (e.g. marimo) Usami was a very introverted person only interacting with people when it was absolutely necessary. Except his friends Takahiro and Hiroki. Usami spent most of his life in love with Takahiro while Hiroki loved Usami just as blindly.

Usami spent the majority of his childhood alone writing in notebooks. Most assumed it was a journal (at least those who cared enough wonder about him) but it was soon discovered that they were novels. His older brother's friend and later his editor was the one to discover Usami's talent. After convincing the teenager to become a novelist it wasn't long before Usami was the youngest person ever to win the Naomori Award. He also graduated Teito University Law School at the top of his class. This is mentioned once in the very beginning of the story but it is brought up again.

Usami's back story is by far the most depressing but it seems more realistic. He comes from a filthy rich background but covets nothing. He was never really close to anyone, not even Takahiro, because of the hurt and anger from his past. His father cheated on his mother before he was born which is how his older half-brother came to be. He had a male tutor as a child who molested him. This is mentioned briefly in the begining of the anime/manga and Junjou Minimum illudes to it. The one adult figure who seemed to care most for Usami was the butler named Tanaka. He truly seems to miss the young master when he is away and spent the most time with him when he was a child. Usami doesn't seem to have the same affection for the butler but there is a deep respect there.

Usami treated Takahiro with kindness, gentleness and respect. But he believes that every time he has sex or some form of sexual contact with Misaki it is him showing his love in the best way possible though he often says the words aloud. If his parents had shown him love in anyway, even approval, Usami wouldn't be as messed up as he is. But Misaki's form of love, as strange as it is, is what is healing him the most.

He has a half-brother, Haruhiko Usami , born to a different mother who, according to Usami, is always trying to take what's his as shown when Haruhiko says he "loves" Misaki.

His father, Fuyuhiko Usami , like Akihiko, is very childish. They both like to collect toys, in both cases, it seems the two love bears. Akihiko collects stuffed bears and trains while his father is more into the bear woodcarvings, as shown through his requests to Misaki about talking about bear woodcarvings.

Misaki's older brother and the one who asked him to tutor Misaki to help him pass the college entrance exam. When Takahiro's work moves him to Osaka, Akihiko, who was already harboring love for Misaki at the time, suggests that Misaki comes to live with him. Akihiko was comforted by Misaki when he found out that Misaki's brother was getting married. He was touched that someone was crying for him, knowing that Misaki saw through his facade and knew how much he loved Takahiro, as well as how cruel it was of him to want Akihiko to be 'the first person he introduced her to'.

Akihiko's editor and friend, and is frequently yelling at him to finish his books and meet deadlines. She is a devoted fan of his, as indicated when during their first publishing job together when she and her crew busted into his home to find him pretty much unconscious on the floor. Rather than call a doctor or seek any kind of medical attention for him, she roughs him up even further and demands that she tell him where the manuscript of his latest chapter is. In fear that one day he may actually die, he gave her a key to his home.

Akihiko's childhood friends, and they use to have a meeting place together in the forest near Akihiko's mansion. Hiroki was also one of the person which encouraged Akihiko to publish his writings. Hiroki also used to be in love with Akihiko, until later on, when Hiroki meets Nowaki. While he tells Nowaki that he still loves Akihiko (manga), he loves Nowaki differently.

Thought we do not know much about his past, we know that Akihiko lived in England for 10 years and comes from a very rich family. It is said that he was, and still, is a fragile person. (Check "Junjou Minimum" for details.)

Notable Relations (some mentioned above) 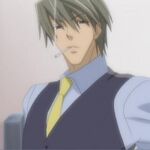 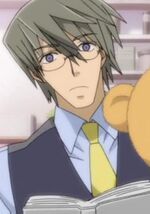 Add a photo to this gallery

Retrieved from "https://junjouromantica.fandom.com/wiki/Akihiko_Usami?oldid=12237"
Community content is available under CC-BY-SA unless otherwise noted.